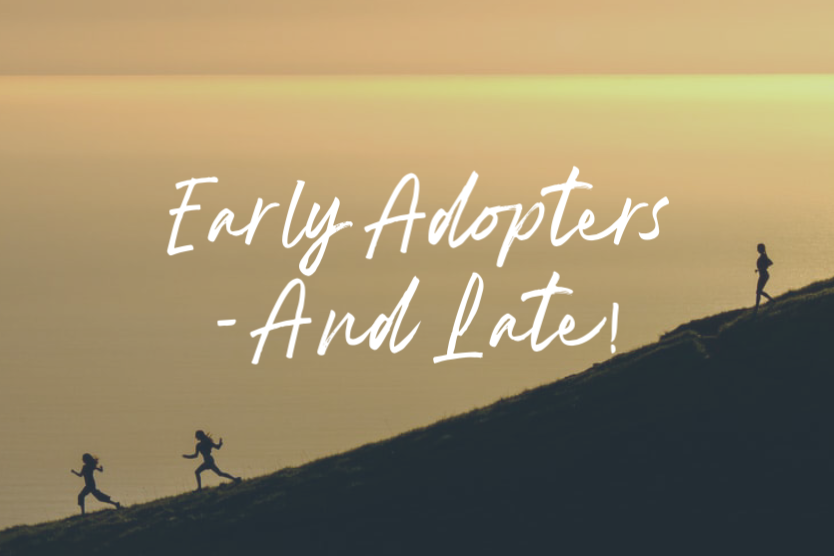 Years ago I learned the concept of early, middle, and late adopters. I’ve been watching and confirming this phenomenon ever since.

This understanding has helped me tremendously in pastoral leadership. I think it will help you as well in the way you lead and relate to people.

Here’s the way it works.

We all fit in one of three categories concerning change and adapting to it.

Middle adopters are the normal people we meet most every day. Instead of charging ahead about change, they look at the evidence, weigh it carefully, and then make decisions. In a church congregation or any other group, these are the people who make most of the decisions. They may not be the most persuasive, but if left to a vote they will carry the day.

The rest of the population is made up of early adopters (about 15%?) and late adopters (also about 15%).

Early adopters look at possibilities, hear a suggestion, and adopt it right off the bat. As you might expect, sometimes they don’t make the best decisions. But, in a church setting you really appreciate those people.

Late adopters are very slow to accept new ways of doing things. In a church, you have to walk these people through decisions.

None of these three groups is “right.“ They are simply who they are— neither right nor wrong, just people.

I find this analysis very helpful in understanding how a pastor leads people. It helps you understand that no decision will be made on the spur of the moment nor should any decision take an inordinate amount of time to make.

It also shows that leadership takes time and hard work. It is always going to take longer than you think to get a strong decision made. You will have to explain the plan and the reasons for the plan to a lot of people–and you will have to give them time to process it.

This analysis also helps me to understand the people around me.

For years in my congregation, the most influential person in the congregation was a classic late adopter. I learned that I had to help him walk through and process change.

While he was a late adopter, once he believed a decision to be a good pathway he was on board for the long-haul and could be counted on in tough situations.

Tomorrow I will use the early, middle, and late adopters paradigm to talk about how we are re-gathering as a church.