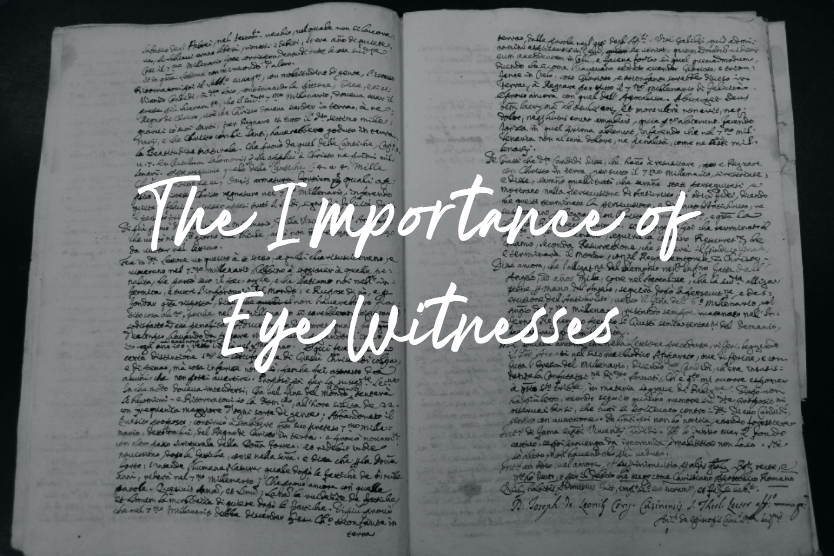 Paul communicated the experience of the Christian church as he described all those who could give testimony that Jesus appeared after the crucifixion alive (1 Corinthians 15:3-8). When you put together all the testimonies of the appearance of Jesus, you find that Jesus appeared at least eleven times over a 40 day period to a total of at least 500 people and most likely many more than that number.

The resurrection of Jesus has solid eyewitness evidence.

It has become fashionable, at least where I minister, to hear people say, “We are not even sure that Jesus Christ ever lived,” or “How do we know that what the original biblical writers wrote is anything like what our Bibles say?”

From the point of view of the manuscript evidence, both of those are absurd statements.

Paul’s statement to the Corinthian believers is one of the earliest Christian creeds. It contains four elements: (1) Christ died for our sins as the Scripture foretold, (2) He was buried in a tomb, (3) He was raised from the dead, also following the Scriptures, and (4) He appeared to many people known by name and a very large group of people at one time.

This creed may go back to within at least five years from the death and resurrection. This would have been long before any of the New Testament writings.

From the very beginning, we have evidence for the life and death of Jesus, His burial and resurrection, and His numerous appearances to hundreds of people. If these words had been spoken and written three hundred years after the time of Jesus, they could be seriously questioned. Because they were spoken and written so early, they give us amazing evidence of the events that occurred.

If these words were not true, any questioner could have demanded to hear from the eyewitnesses. If the eyewitnesses didn’t exist, this faith in Christ could not have survived.

But those eyewitnesses did exist, and they went over the Roman Empire telling what they had seen and heard. Their testimony, their changed lives, and their love for one another and for the world swept over the empire so that the known world heard the good news that “God so loved the world” and gave His Son to forgive and make people new.

May our own world be touched by the love and compassion of God.