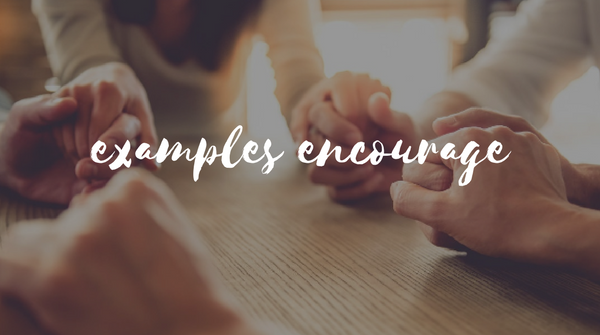 The apostle Paul famously told many of the churches where he ministered to follow his example.

Many modern day Christians are astounded at what Paul said. They are amazed at this command for two reasons. First, they don’t see themselves as a proper example, and they wonder if Paul could be. Second, I often hear Christians who think that Paul may have been somewhat prideful or arrogant to encourage new believers to follow his example.

I think an example is the very best way to teach other people.

First, being an example shows exactly what you want others to do. Most of us need to see exactly how something looks. For example, when I ask for technology help I don’t want someone to tell me how to do it or to do it for me. I want to let me see how they are doing what I want to be able to do. I learn by what I see others do.

Second, examples encourage. When we see others being disciplined, following Christ, and doing things that please God, we are much more encouraged to be faithful and obedient ourselves.

That’s what an example does.

Paul told the church at Philippi to learn from him and from others who lived as the friends of God. “Join together in following my example, brothers and sisters, and just as you have us a model, keep your eyes on those who live as we do” (Philippians 3:17).

Finally, good examples do more to bless young believers than most anything we can do. We give them a picture, and we give them encouragement.

New or young believers will become people of prayer, generosity, and faithfulness when they see us modeling those things. As we are students of the Word and live holy lives, they will seek to do the same.

Here’s what I want to ask you to do. Remember that other people – – particularly young believers – – are watching. They are trying to determine if the Christian faith is real to you and what value they should place on it.

When you give positive, encouraging, and faithful examples, you are building up the church and glorifying the Father who is in heaven.